July to Sept: A Flurry of Days

Autumn leaves are drifting down – which means it must almost be time for The Woods, our big mainstage production for this year. In the summer flurry of activity, we’ve been a bit quiet on the blog-front, so this is a catch-up – on all we’ve been up to and where we are now.

We finished up our summer term with some wonderful July performances by the DAS and Little Doorstep groups.

We saw parents get up and dance with their children – fueled by Polly’s contagious enthusiasm.

There were wonderful devised and original stories, songs, dances, and some teaser hints from The Woods too.

Our oldest group, Doorstep Youth Theatre, performed a scratch of Out of the Woods at the TYPify festival in Exeter – a gathering of SW youth theatre groups, organised by Katharine Stevens and Lucy Hirst from The Young Pretenders.

What a wonderful event! We were so inspired by the work we saw, and really hope this becomes an annual affair.

Our Saturday drop-in drama groups performed a final combined sharing in mid-July, along with an indoor picnic.

This was an emotional day, as we said goodbye and good luck to Doorstep Co-Director Meg Searle, who is relocating to Bath.

We know that we’ll be seeing lots of Meg this year, but she will no longer be running the Saturday morning groups, which have been her special project since Doorstep began. There were a few tears, and lots of happy and proud smiles, knowing that her legacy is strong and vital. 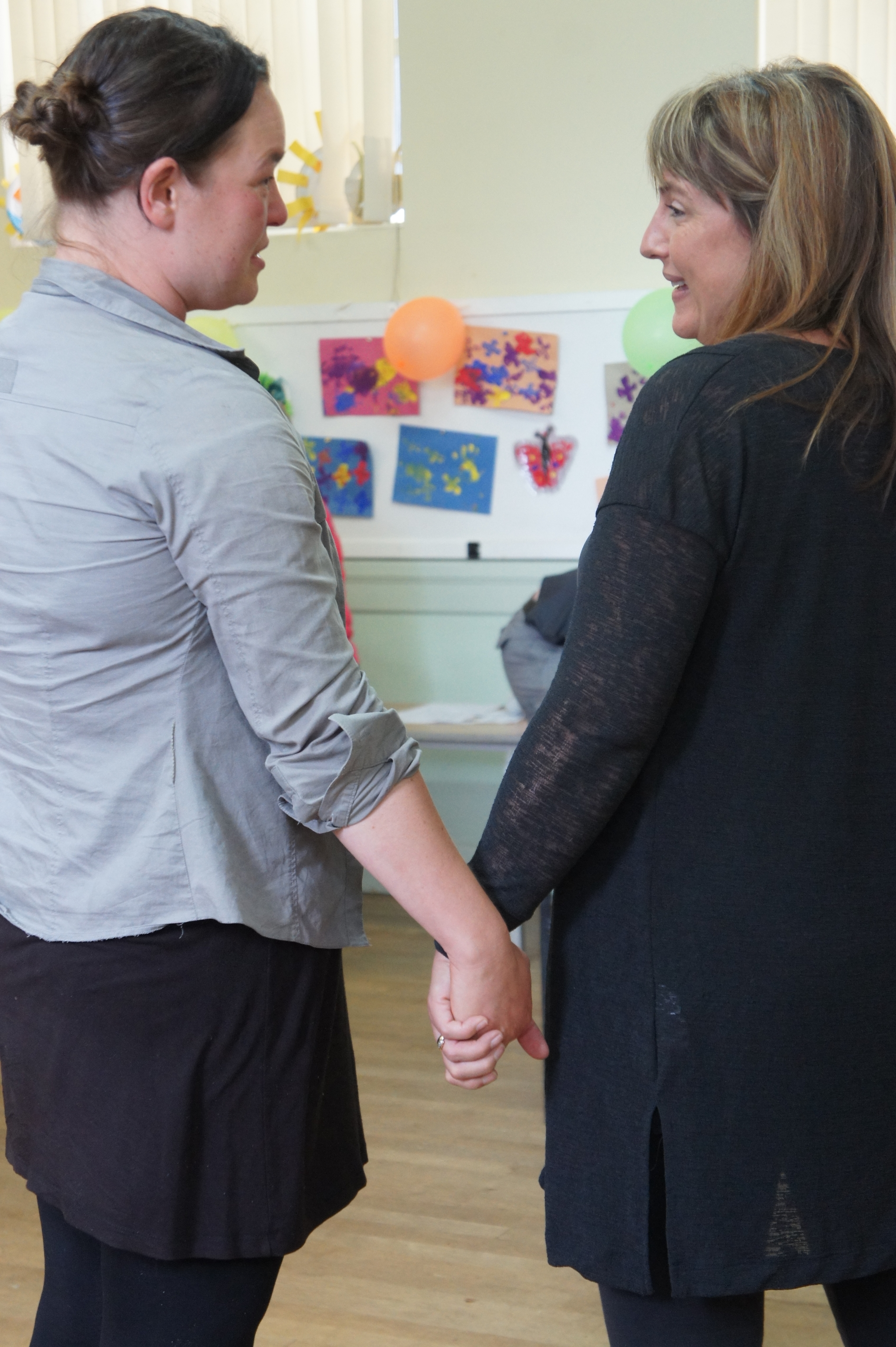 Doorstep Co-Director Jade Campbell will be taking the Saturday groups over (beginning 16 Sept 2017) and we can’t wait to see what exciting new projects they take on!

And no sooner was term over, but we fell right into 3 intensive rehearsal days for The Woods. This was the first time that the Sondheim score was brought together with the raw, developing material for the original second half. The intensive was a buzzy, jam-packed, productive, and hard-working three days, with some incredible artists supporting.

Kate Graham from Soundlaunch has joined the project as a music mentor, and she jumped right in, songwriting with groups of young people from the first moment.

We welcomed our new Foot in the Door production interns Sophia & Ethan, who will be stage managing and operating LX/sound for the show.

Production Leads Mair George and Nat Palin took up residence in the Palace Theatre basement to get the scenic design and costume ideas mapped out. 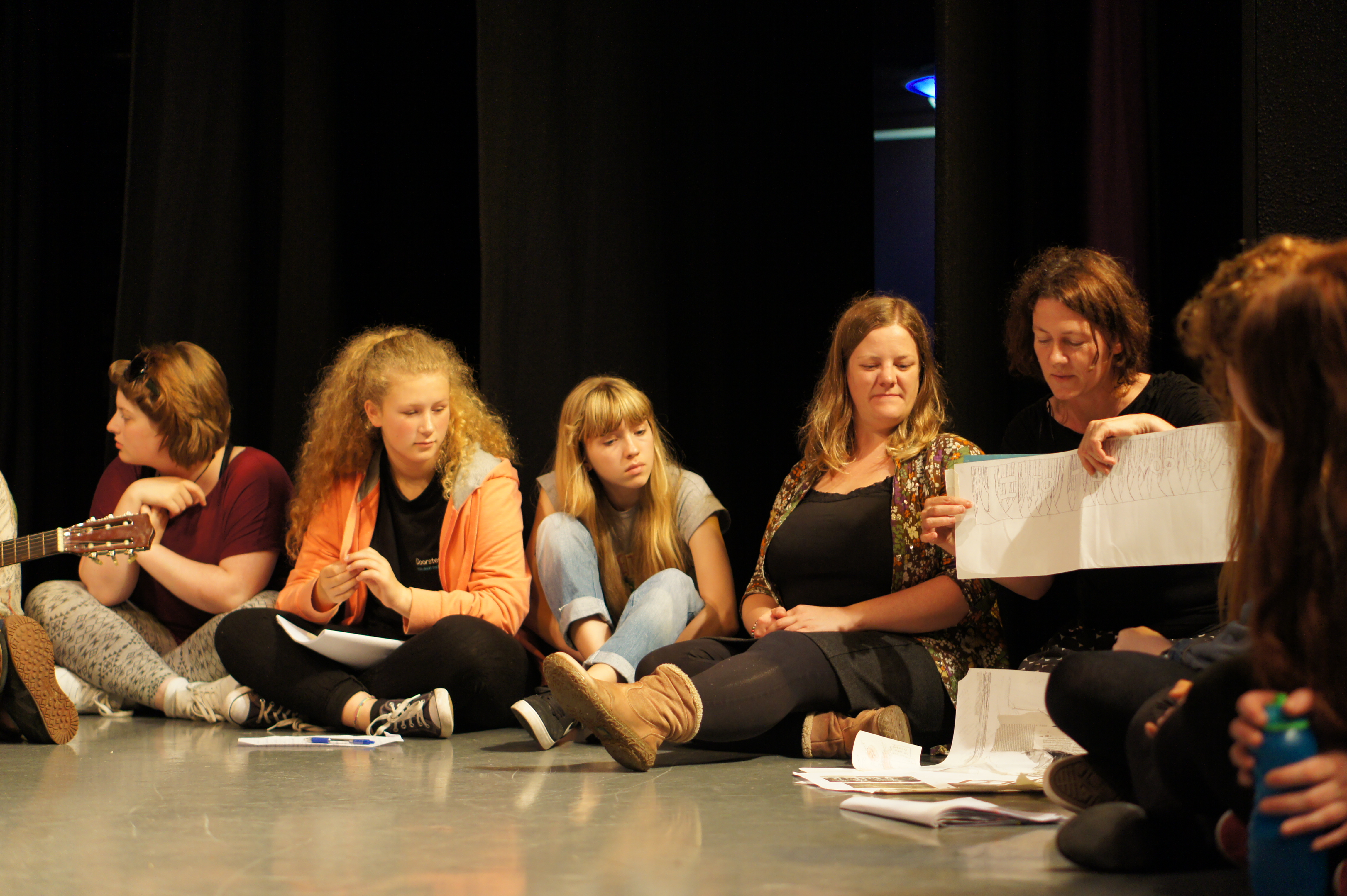 Erin & Hugh turned the cafe/bar into a writer’s workshop space. 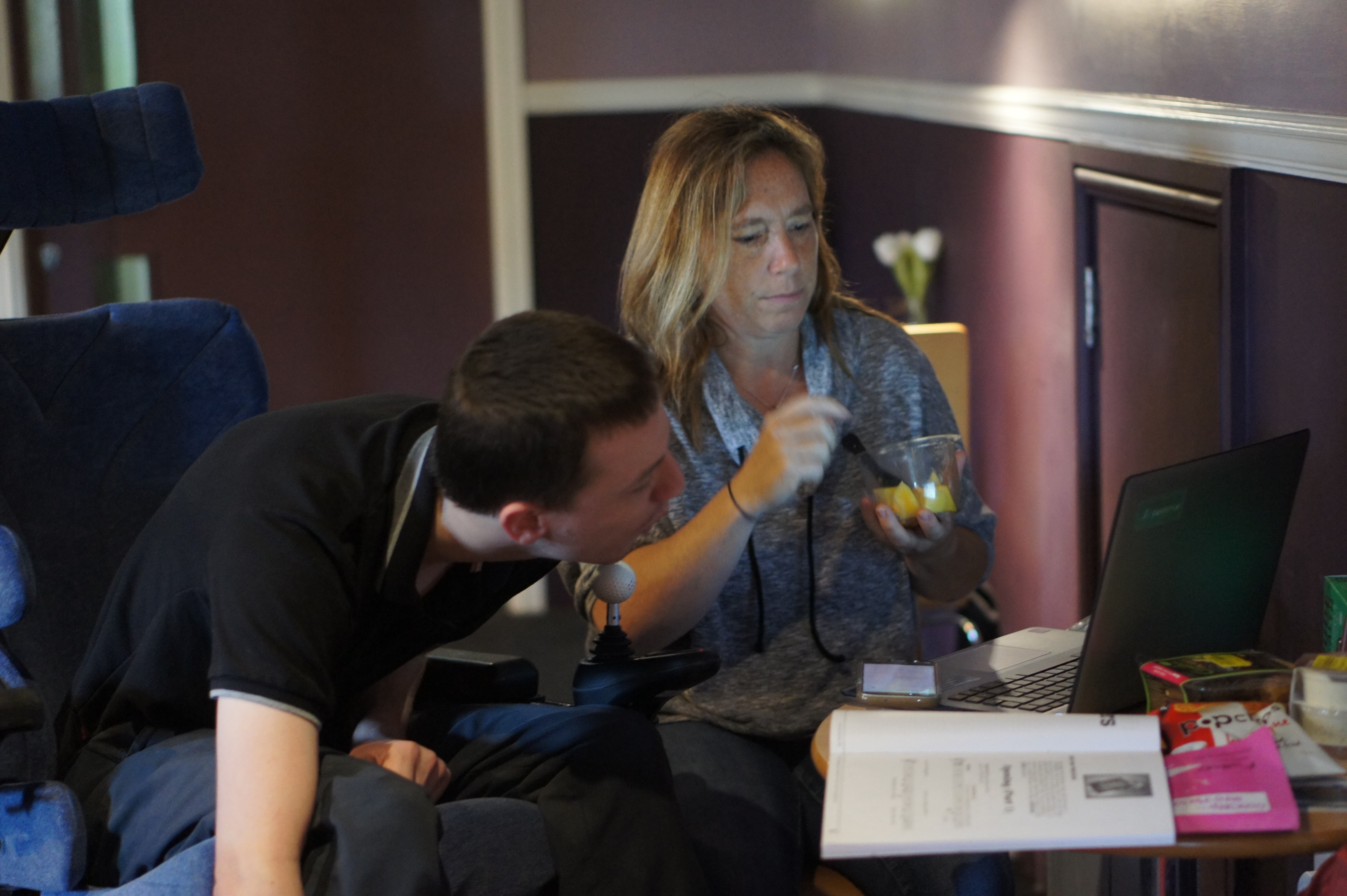 The Palace Theatre staff are wonderful and they let us have the run of the place – so we filled every nook and cranny with young people working creatively. We wrote songs in hallways and stairwells.

We tried out make-up ideas in the lobby on the floor.

We side-rehearsed dance routines in the vestibule. 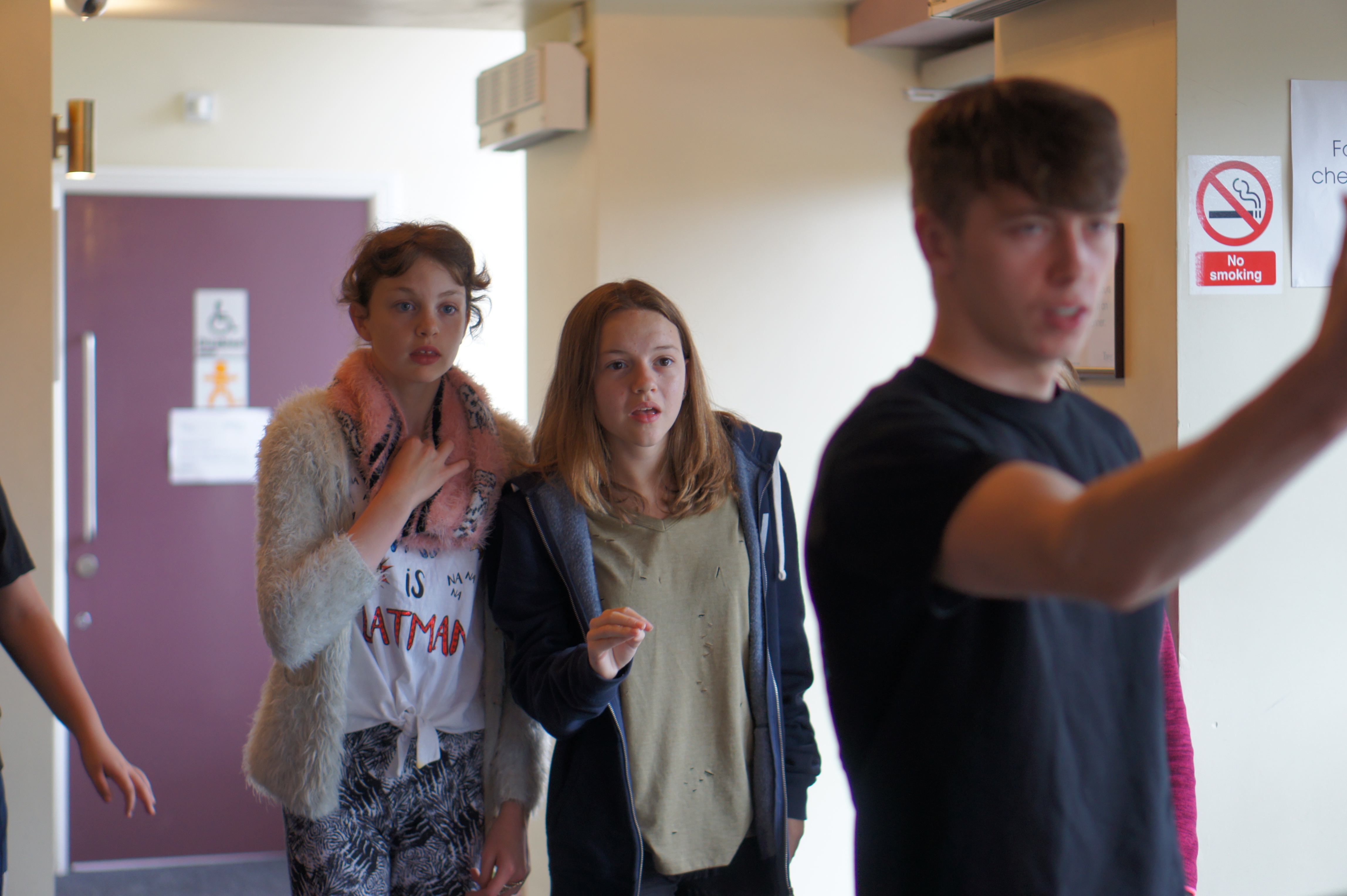 The cafe/bar was full of writing pockets and instruments and laughter. 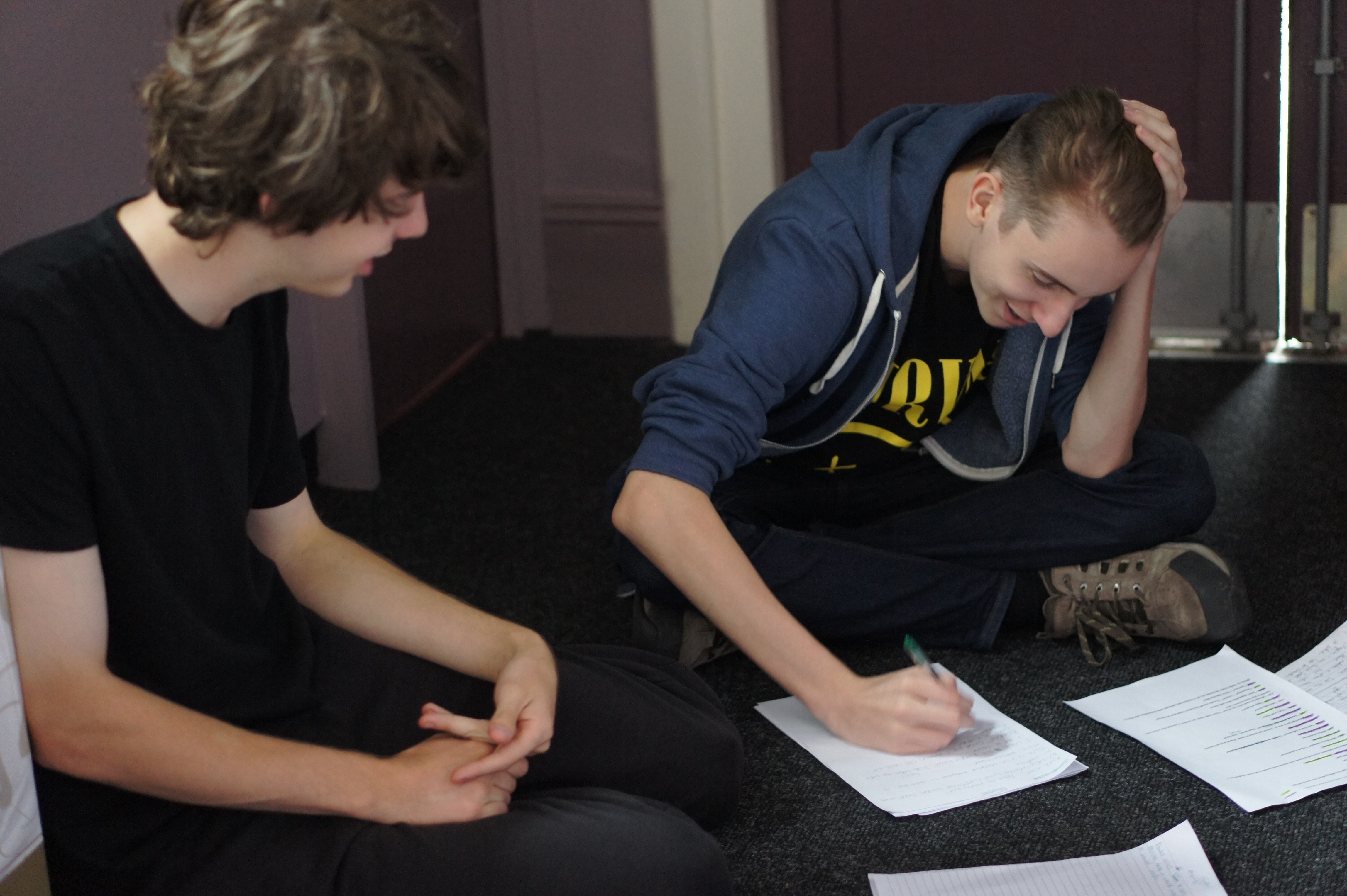 And Polly ruled the script rehearsals on mainstage with an iron fist, an unyielding schedule, and a heart of gold.

At the end of the July Intensive rehearsals third day, we were ready to fall in a heap – but there was one last surge of energy on Friday afternoon as we trooped down Palace Avenue in a long walking parade toward the Paignton Carnival on the Green.

In the pouring, blustering, sideways July rain, the young people from our Tuesday DAS Junior group and the principles all performed at the carnival.

Special bravery awards are due to the parents, carers, family and friends who stood supporting them with rainjackets soaked and saturated, hoods pulled tight around faces – broad smiles shining in spite of the weather.

After this epic feat, everyone enjoyed a well-deserved month’s holiday. (Although Polly and Mair did also run two wonderful Play-in-a-Day workshops in August).

These August workshops were such good fun – staging a full production in a single day, learning songs and dances and parents arriving at 4pm to watch the performances. It was great to have Lee Thomas from the Palace Theatre providing technical mentoring for these! 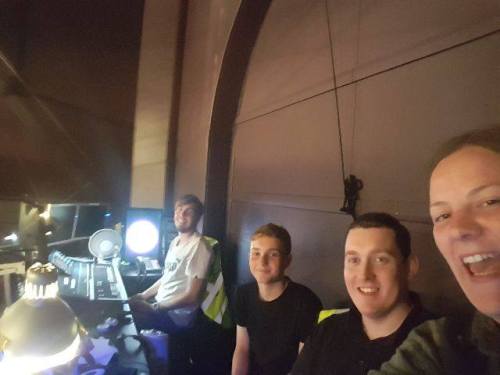 Other than the Play in a Day summer activity, August may have seemed quiet… but that serene surface was deceptive. Behind the scenes, a flurry of quiet prep activity was happening. The Out of the Woods script was being written by a small devoted writing team, costume plans were being drawn up, and the music score for the Sondheim half of the show was intricately detailed and planned by Harriet, our wonderful DAS Assistant Lead.

With all this quiet, underground activity, it felt like the summer month break passed in a blink of an eye – and now we’re in the midst of a new flurry – preparing for autumn term. We’re already in mid-flow – The Woods company has already had their first Sunday rehearsal – where we read through the original script. We’ve spent the last week making last changes to the script based on the read-through, and this week has been full of songwriting… expect another blog post about that! This early start is because we’re performing a couple of excerpts from the show at the International Agatha Christie Festival on the 16th of Sept. So it’s a mad dash to be sure we’re ready! More about all that to come.