I’ve just completed our interim report for the Stepping Stones project, which is our Arts Council-funded programme of participatory theatre activity in Torbay, running from April 2016 to April 2018.

To some degree, interim reports are thankless to write. For one thing, it’s a lot of paper. A lot of numbers. A lot of totting up.

But on another level, they can be a really great chance to add everything up (literally and figuratively). I find them a useful space for reflection – on what has gone well, on what hasn’t and on the surprises we’ve encountered along the way. It’s also an exercise in honest storytelling – how to think through the challenges and frame them proactively in terms of moving forward. I find this process of storying really useful, both in life and in terms of large scale projects like Stepping Stones that involve lots of artists, lots of partners, and LOTS of children.  I guess any moment of stillness and reflection is good, but especially when you’ve been as busy as we have.

The first year of Stepping Stones has been transformative for Doorstep Arts. There is absolutely no denying that – it has utterly changed our sustainability from a small struggling arts organisation with no core infrastructure, to where we are now.

But even I was really pleasantly gobsmacked by the level of activity we’ve managed to churn out in this first year. When you add up the numbers, it’s really overwhelming to think about the number of children, young people and families we’ve worked with in an integrated and ongoing way throughout this year – the sustained and deep approach has a sense of geographical embeddedness and integrity too often missing from parachuted-in one-off projects.

At the mid-way point in early April 2017, we have now delivered a full year of integrated year-round activity. This has included 3 full terms of participatory drama for children and young people in 11 different drama groups across Torbay. This equates to a total of 33 weeks of ongoing consistent, high-quality participatory arts provision across Torbay for 151 children aged 4 to 25 each week.

Over these three terms, participants have explored a new theme/stimulus chosen by the artistic team for each term. For example, in Autumn Term 2016, all our groups explored themes from Maurice Sendak’s Where the Wild Things Are, which took wildly diverse forms.

They chanted the phrase ‘Where’s our rumpus?’ with regard to current global and UK contemporary events, and wrote spoken word poetry about what it means to be growing up in this context, facing scrolling social media feeds of overwhelming political apathy.

Their work has astounded us with its complexity, its maturity, its playfulness, and the groups have embraced a diverse set of aesthetics and new theatrical languages with boisterous enthusiasm and hunger to learn more. All of the 151 young people we work with each week now identify as artists and believe that they can make work of substance– that their voices matter and deserve to be heard.

In addition to this, our Open Doors outreach programme has worked with 21 schools, providing 35 visiting professional artist workshops for 1,053 children from Key Stage 1 to Key Stage 4.

Through Open Doors, we’ve also supported 17 workshops by professional artists in the Torbay Libraries, working with 441 participants over the year.

Our Foot in the Door internship and mentorship programme has supported 12 emerging artists in Torbay through 1:1 mentorship, providing them with paid stipends, advice, office space and support from professional artists and producers.

We began the project in April 2016 with an amazing launch event – a large community dance platform event co-hosted with Dance in Devon.

This platform, titled Dance on Your Doorstep, which featured 103 community participants aged 4 to 84 sharing their work together on the Palace Theatre stage.

On 31 March 2017, we finished up the first year with another platform event at the Palace Theatre, titled Up and Away, which featured all our Doorstep groups performing their original work together on the Palace Theatre stage for a packed audience.

These two bookend events have created a sense of aspiration and achievement for us and for the young people we work with, and the use of the Palace Theatre mainstage has been important in enticing participants from our community centre sites to participate in new places and with new people – we can see the progression routes into the arts for Torbay’s children are really working.

The Stepping Stones project has created clear progression pathways to access Torbay’s theatres from some of Torbay’s furthest reaching neighbourhoods.

On 1 April 2016, we took over the creative learning provision based at the Arena Studio at the back of the Palace Theatre in Paignton. We re-titled the offer Doorstep Arts Studio Courses (or DAS) and after a first summer term of transition, we are now thrilled to find that 5 DAS courses are running with a live total of 75 children taking part – this is an increase of 66%, with further growth expected. In the first transition term, DAS courses were taught by Doorstep co-director Jade Campbell and associate artist Michael Smith, who focused on devising/original theatre skills. 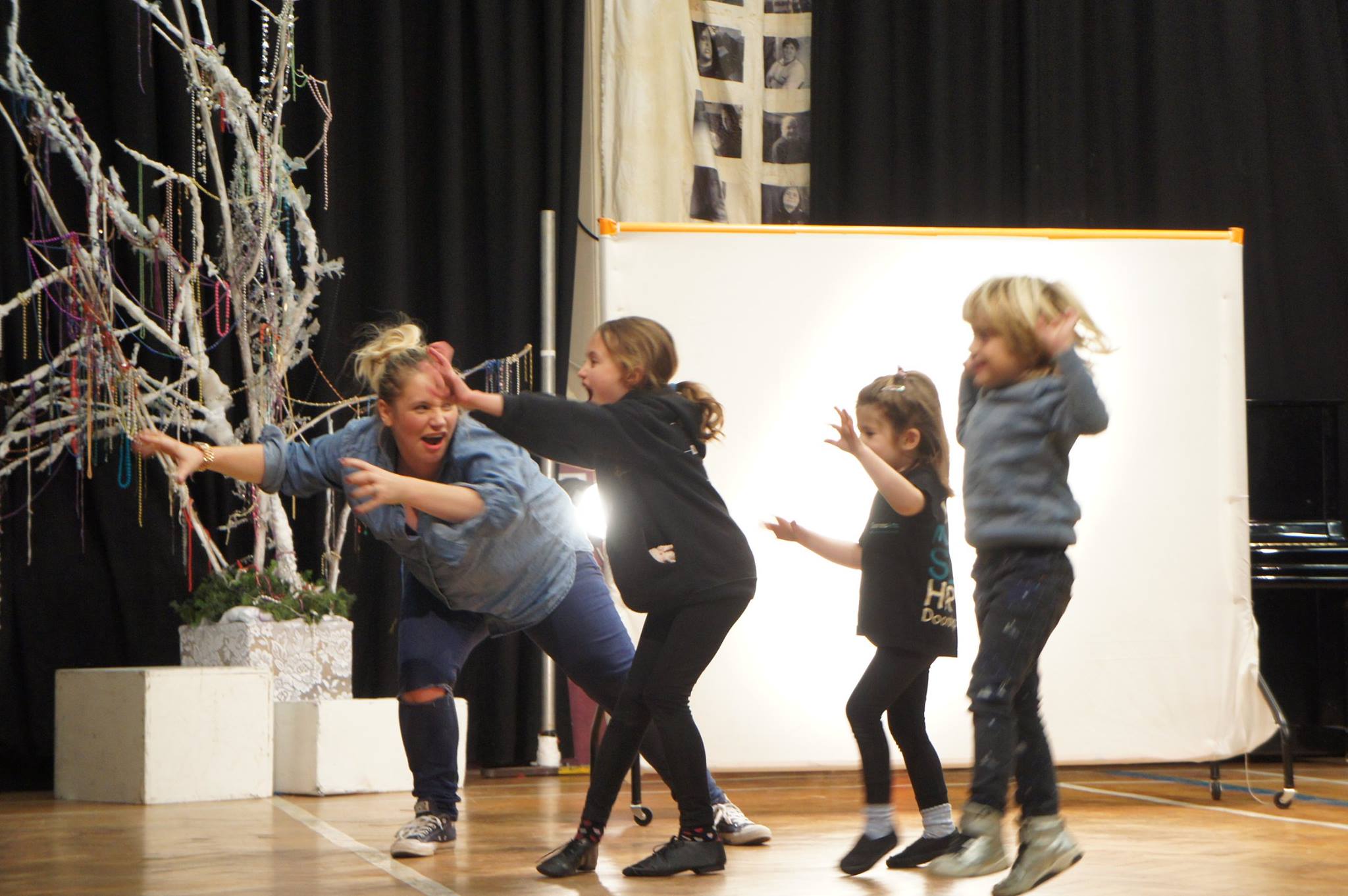 From Sept 2016, we have employed Paignton-based theatre-maker and Dartington graduate Polly Ferguson to take over the leadership of DAS. Under Polly, the DAS curriculum is composed of a rich variety of theatre-making skills, including devising, puppetry, new writing, diverse forms of dance (contemporary, Latin American, street) and still some musical theatre too. The numbers in the DAS courses have ballooned under Polly’s vibrant leadership, and we have been astonished at how quickly it has created a bridge for students from our community centre sites. 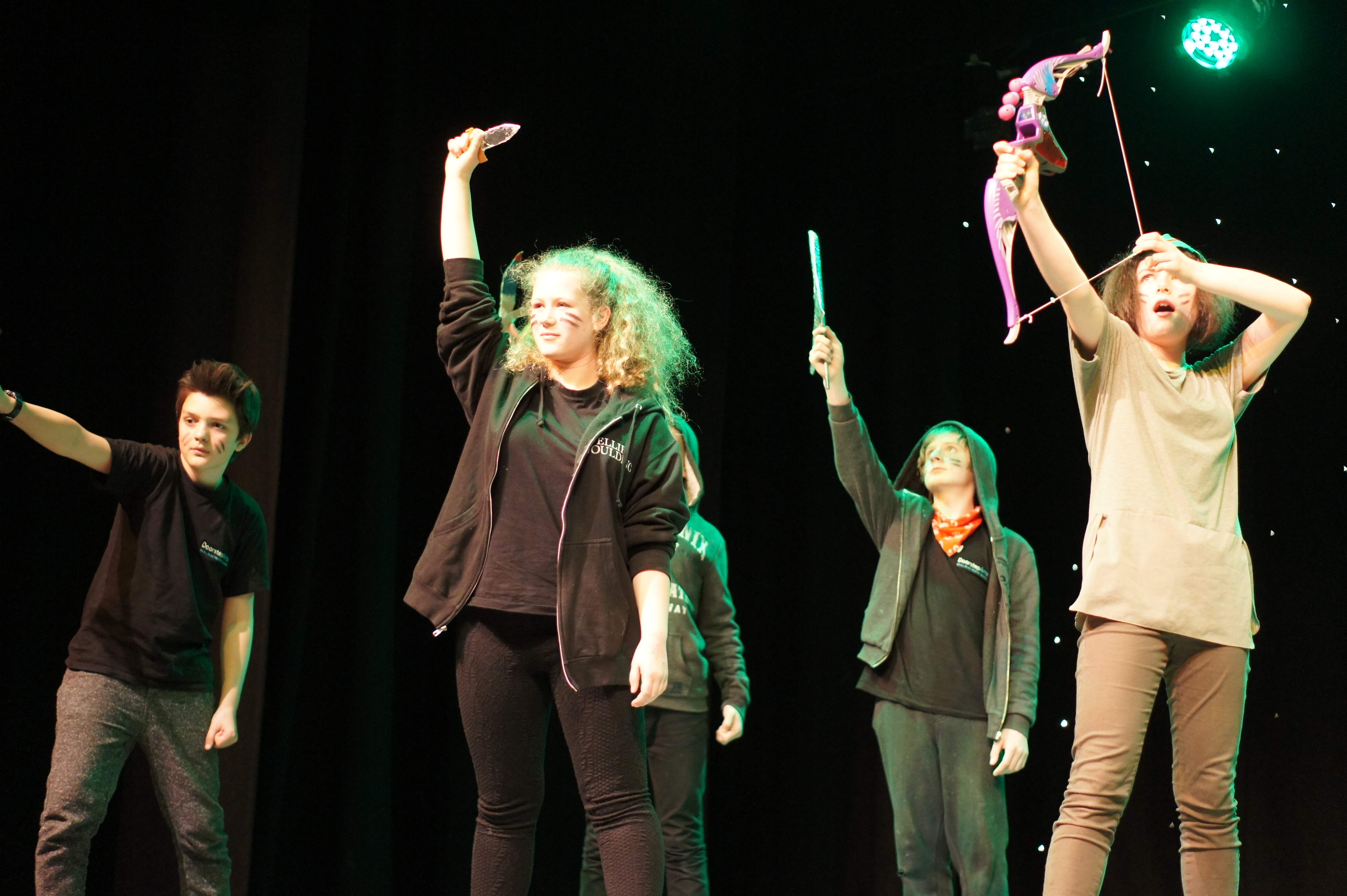 Students are now enthusiastically tackling making original (and challenging!) work themselves, devising in ensembles around complex themes, creating work which raises big questions about the world and their place in it, writing their own music and spoken word poetry, and learning about new diverse forms of performance. 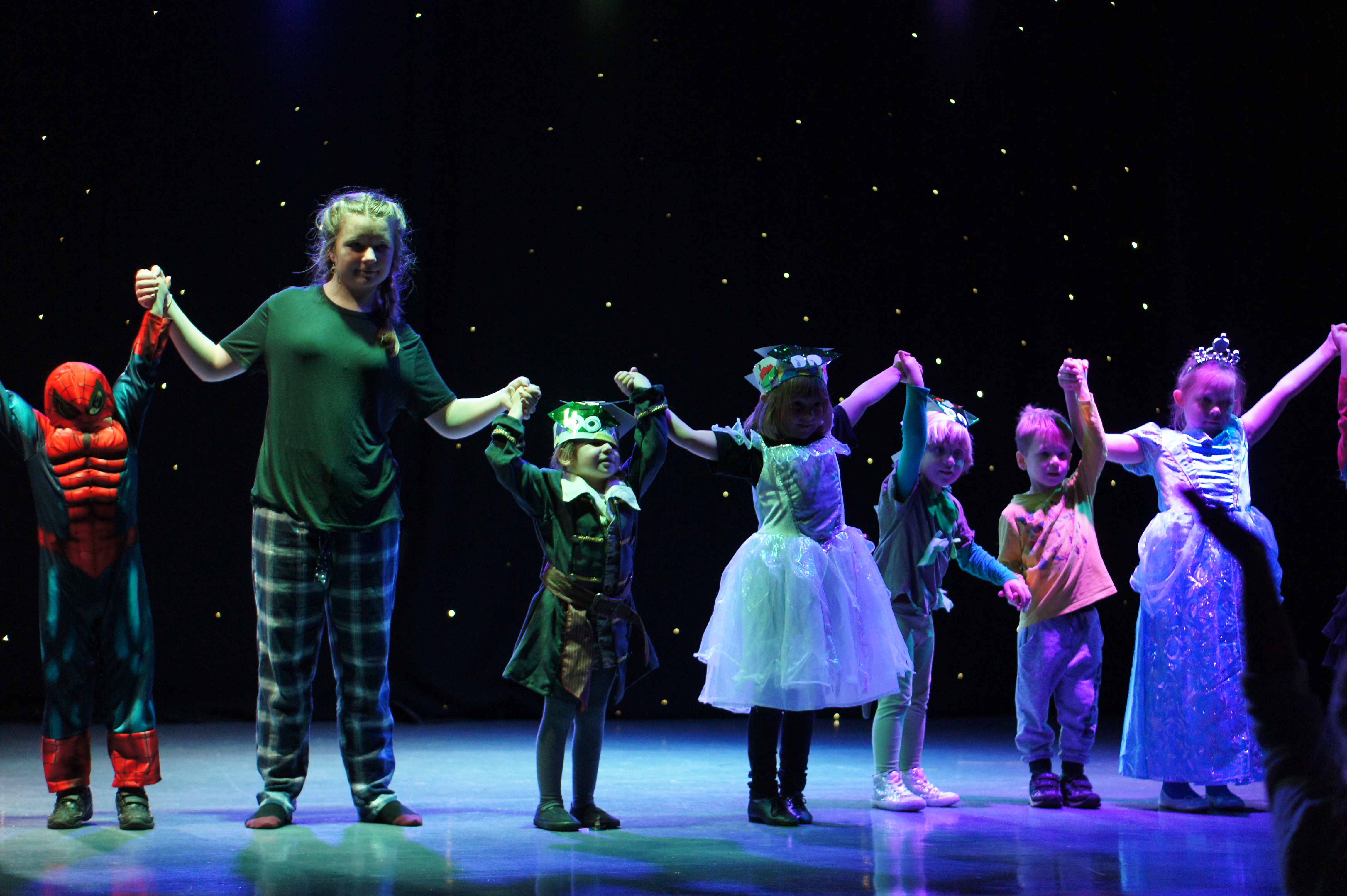 ‘I love that we can make what we want. We’ve never been able to before.’ (DAS participant, aged 12)

‘There is a real sense of community now with the parents and families, we feel like we’re a part of something important.’ (Parent, Little Doorstep and DAS) 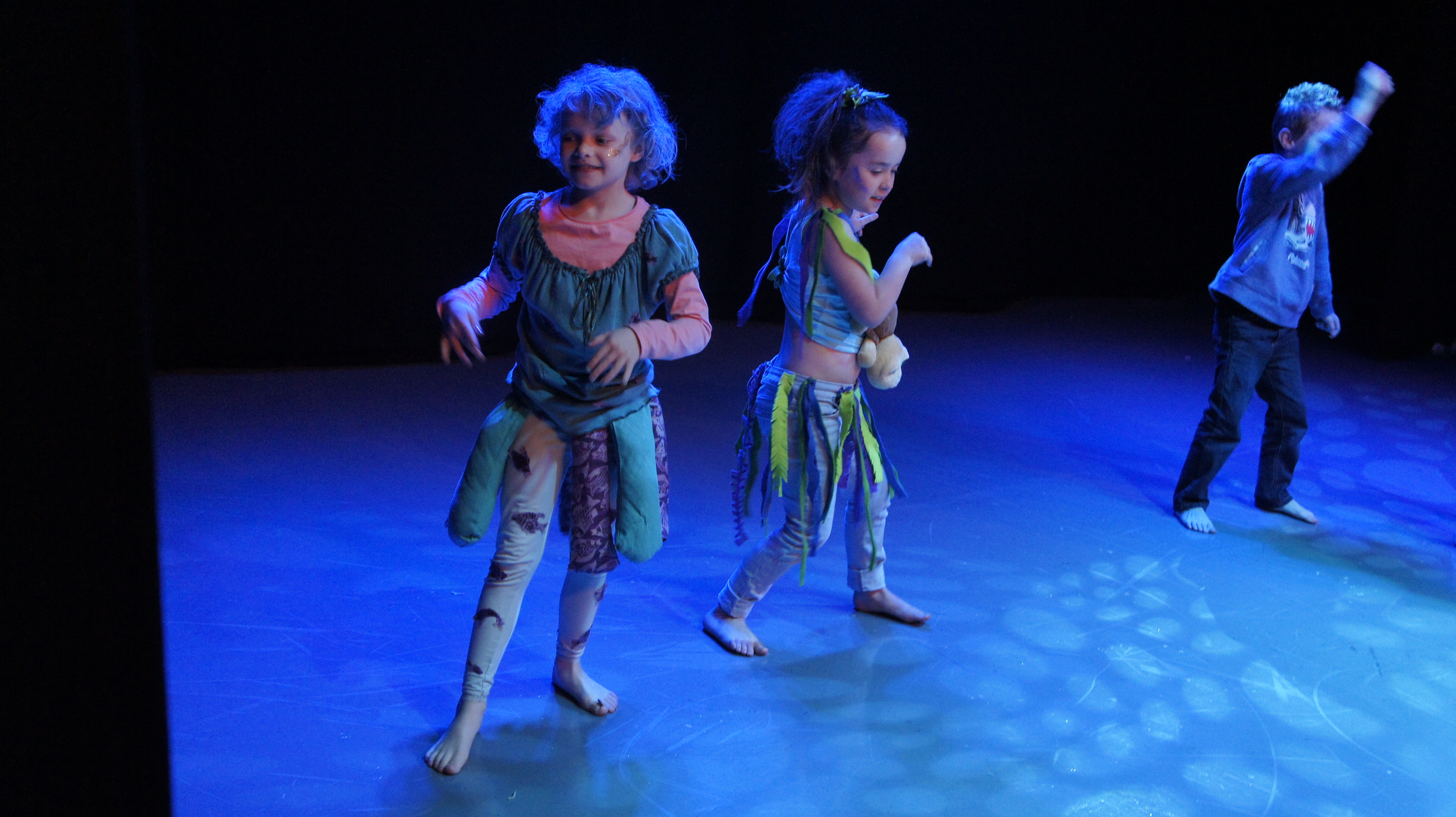 ‘I’ve never worked like this before – it’s like, now, we all make the stories happen.’ (Course assistant)

This last piece of feedback really struck a cord with us, and we’ve adopted it as the new Doorstep Arts strapline because it captures so perfectly what our core ethos is, both artistically and in terms of social change – the notion that we all matter, and ALL children deserve to access the arts and to be artists: ‘We all make the story happen’.

Luckily for us, there is a whole second year to go in this funding… because we’re not done dreaming and working yet… there is too much still to do. In Torbay, the need is huge, and we’re only just beginning.

Our Foot in the Door mentorship scheme will continue for another year. This is an open invitation to young people to express interest in getting involved with Doorstep at any time, and a staged process of support which is unique to each young person’s needs. Over the last year we have supported 12 young people through Foot in the Door – 8 of these have been under 18, and have done work experience, internships, or worked as class assistants with us. 4 of these have been older (18-25) emerging artists who have receive our support, both in advice and financial terms. 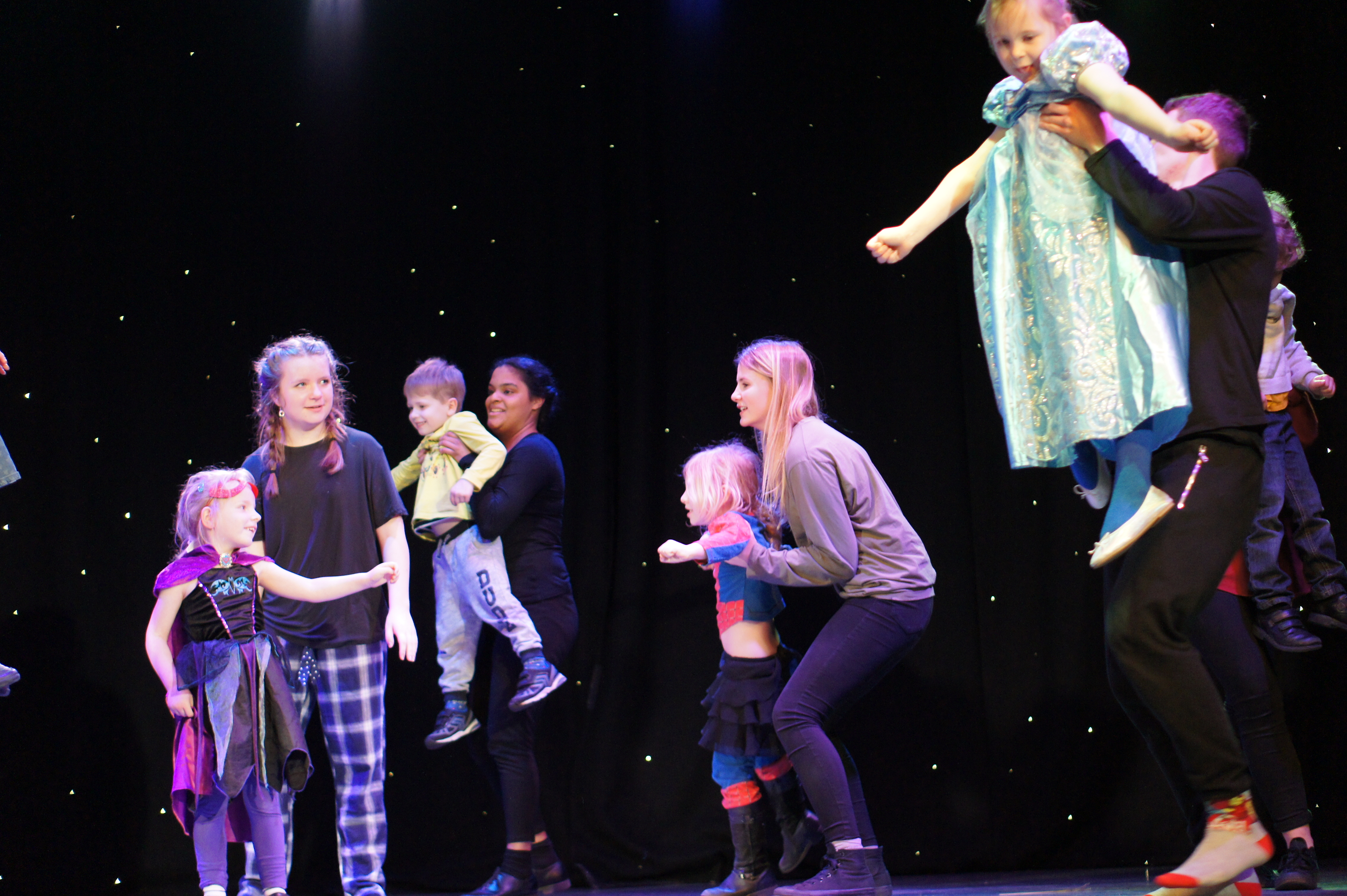 This year has been hard work, but the moment where I felt the most hope and belief about its legacy going forward was when I was watching the Up and Away platform on 31 March, wearing my headset back at the lighting booth. In an inspired decision, Doorstep Director Meg Searle had our oldest participants join the youngest group on stage for a special sequence. The youngest children had devised a physical theatre piece where they wanted to ‘fly’. Knowing this wasn’t possible, we were happy to use our imaginations and believe together with them, but Meg had a flash of inspiration.

In front of a packed audience of their parents and friends and families, these little ones were lifted up and twirled around by the older children, and the impossible happened. They really flew.

Their faces were alight.

In that moment, I could feel the ground move under me – a grinding, rusty creak of enormous momentum as four years of graft… hope… stubborn willfulness to not give in against sometimes impossible odds moved into gear. We’re all lifting each other.

Together, we all make this story happen.

Sometimes, by willfully believing in the impossible, we can all fly.